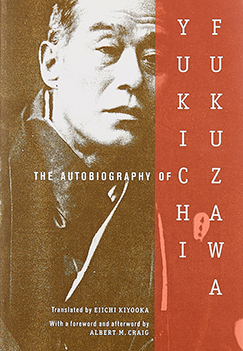 The Autobiography of Yukichi Fukuzawa

The political scientist, Masao Maruyama, wrote that Yukichi Fukuzawa was “a Meiji thinker, and at the same time he was a thinker of the present day.”
Fukuzawa (1835-1901) wrote in this autobiography(Fukuo Jiden, 1897): “I was opposed to the closing of the country and to all the old regime of rank and clan.
I was in the service of the Shogunate but had not the least intention of rendering service.
I disliked the bureaucratic, oppressive, conservative, anti-foreign policy of the Shogunate, and I would not side with it.”
This is even now a brave stance for anyone to take and Fukuzawa’s anti-authoritarian views were very visible to his contemporaries.
As AlbertCraig has observed in his informative afterword: “He criticized the ‘faintheartedness’of those who went over to serve the new government …”
This new Meiji government at one point asked Fukuzawa to take chargeof the schools, pointing out that this was a great honor.
His answer was typical of the man.
“What is remarkable about a man’s carrying out his own work? If the government wants to recognize the ordinary work of its subjects let it begin with my neighbor, the tofumaker…”