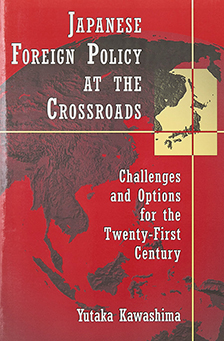 Japanese Foreign Policy at the Crossroads: Challenges and Options for the Twenty-First Century

While teaching a course on Japan’s foreign policy at Harvard, Yutaka Kawashima, ex-vice-minister of foreign affairs as well as former ambassador to Israel, was surprised to find that the material in
English covering the recent evolution of Japan’s foreign policy was so meager.
For this reason he decided to write a book emphasizing foreign policy in the postwar era.
He divides his book into eight chapters, beginning with the history of Japanese foreign policy and following this with a section on Japan’s security ties with the United States.
This is an asymmetrical arrangement wherein the United States assumed an obligation to defend Japan and Japan permitted the U.S. to maintain military bases.
The frustration this involves resembles the reaction of some Japanese in the early Meiji era toward the so-called unequal treaties with the Western powers.
In this and later discussions the author surveys such issues as Japan’s inability to come to terms with its past, its worries about economic vulnerability, and its troubled stand on nationalism and internationalism.
Here the author advocates internationalism.
Japan “must work with as many countries as possible to deepen and widen the sharing of interests and values …”