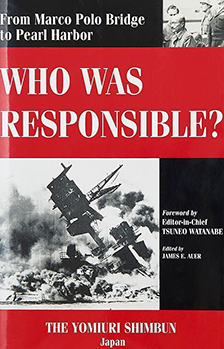 From Marco Polo Bridge to Pearl Harbor: Who Was Responsible?

In 2006 the Yomiuri Shimbun published Kensho—Senso Sekinin (“Verification: Responsibility for WWII”), a full report of the findings of the War Responsibility Reexamination Committee which undertook to determine where the responsibility lay for the aggression against Manchuria, for Pearl Harbor, and for the Pacific War that ended in Japan’s defeat and killed the better part of a whole
generation of Japan’s youth.
That the Yomiuri Shimbun did so, stated Henry A. Kissinger, was “a matter of conscience and integrity.”
The paper’s editor-in-chief, Tsuneo Watanabe, said that he thought it the Yomiuri’s responsibility to tell its readers just who was responsible and that he hoped the finding would “serve as a cue for peoples elsewhere to examine and explore what kinds of miscalculations or blind beliefs could trigger wars in the future.”
Though there has been, and remains, an amount of criticism that Japan had not confronted its past as has Germany, this book is a major step in doing so.
Donald Keene has said that “many Japanese apparently prefer not to know what happened when the military forces of their country behaved in a manner that seems almost incomprehensible today … this book deserves the attention especially of those who never knew or have forgotten the horrors of the long years of war.”