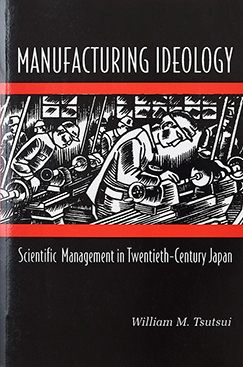 Japan is widely admired for its efficient yet humane management practices.
These are widely thought to be the result of Japanese communitarianism, Japanese paternalism, and Japanese culture.
Tsutsui’s study of such workplace ideologies, however, finds that these acclaimed strategies are not all that novel, are not even especially Japanese.
The model for the ideology is American, a methodology that is known as “scientific management” or, more colloquially as “Taylorism,” named after its originator.
It was dubbed an “efficiency movement” and was introduced into Japan at the beginning of the 20th century.
Since Japan could not afford an alternate American methodology, “Fordism,” full assembly lines being too expensive, it remodeled Taylorism into something that eventually fit the country perfectly. Japanese managers founded a “revised” Taylorism that combined a respect for labor with mechanistic efficiency.
Much the same kind of tweaking occurred elsewhere, in the US, for example, but the Japanese version included a standardization in which the Japanese government played an active role in reducing competition, lowering costs, and injecting “Japanese spirit.”
In presenting this history of a constructed ideology, the author questions much of the mythology that has surrounded the West’s idea of “Japanese” management.