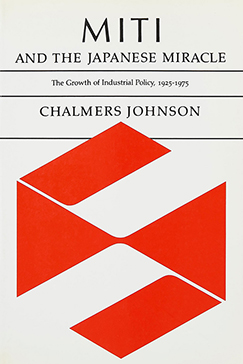 MITI and the Japanese Miracle: The Growth of Industrial Policy, 1925-1975

In this seminal study the author posits the relationship between governmental institutions and economic activity.
In it he sees not only free trade vs. mercantilism, but also socialism vs. capitalism, and ultimately a concern with procedures, which is liberty, vs. a concern with outcomes, which is equality.
Japan’s postwar achievements—becoming the world’s second most productive open economy—is seen as a successful example of a stateguided economic system.
The Japanese economic bureaucracy, particularly MITI (the Ministry of International Trade and Industry) has been the leading player in the performance of the Japanese economy.
Indeed, the form and consequences, as well as the speed, of Japanese economic growth cannot be understood without an admission of the contributions of the MITI.
Its achievements are central to the debate continuing between advocates of command economies of the communist type, and those favoring mixed market economies of the Western persuasion.
Among the many differences between the means of Japan and the means of the West, is that in Japan the state’s role in the economy is shared with the private sector, and that both the public and private sectors have made the market work for developmental goals.
This pattern has proved a most successful strategy.