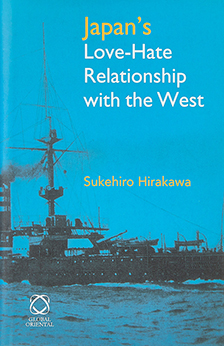 Japan’s Love-Hate Relationship with the West

The author has said that he has felt a great discrepancy between Japanese views and Western views, not only within the general public, but also among academics specializing in international and intercultural relations.
His book is an attempt to bridge some of the gaps, in the process breaking some of the linguistic and cultural barriers.
He is protected from the temptations of one-sidedness by his comprehensive knowledge of Western as well as Japanese history and literature, and by definition all of the essays in the book are driven by a strong commitment to cross-cultural elucidation.
This enables him to see how, for example, Japan built its own colonies while at the same time denouncing British and American colonization, what he calls Japan’s “anti-imperialist imperialism.”
Hirakawa divides his work into three sections: Japan’s Turn to the West; Japan’s Return to the East; and From War to Peace.
Here he is able to explain why modern Japanese writers so oscillate between East and West, feel such a major discrepancy between Japanese and Western and why the West remains so ambivalent toward Japan—academics and the public alike.