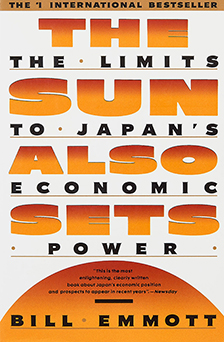 The Sun Also Sets: The Limits to Japan’s Economic Power

Japan’s economic ability to change has long puzzled foreign commentators.
Japan’s progressions and regressions seem to call for explanation.
One argument is that Japan is somehow “different” from any other nation.
It is to this that the author, former Tokyo bureau chief of The Economist, turns his attention.
He first clears the ground by demolishing the commonly held view that Japan is unchanging.
Indeed, Japan’s ability to adjust to new circumstances, to grasp new technology, has been seen as accountable for its economic success.
And perhaps for its economic failure as well.
As one commentator suggested: “The book’s title comes from the author’s assertion that Japan’s huge financial surpluses could shrink as rapidly as they appeared …”
During much of its existence Japan has been a debtor nation, borrowing more than it couldproduce.
It must inevitably succumb to the laws of economics, one of which is “countries that build surpluses must eventually see them shrink.”
In the century and a half since Commodore Perry introduced Japan to gunboat diplomacy the country has gone through several periods of growth and matching periods of recession.
Here, the author questions the international assumptions of Japanese efficiency, and assures us that the Japanese are not all that different from the peoples of the West.