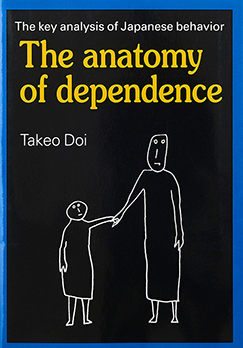 The Anatomy of Dependence

This famous book describes at length the author’s concept of amae, which he describes as a uniquely Japanese need to be in good favor with and consequently be able to depend on the people around oneself.
He likens it to children’s assumption that parents will indulge them, and describes the Japanese ideal relationship as that of parent-child, emphasizing that all relationships strive for this closeness and protection though such an embrace does to some extent crush initiative and individuality.
It is Doi’s contention that European languages lack an equivalent word for amae.
This lack, he argues, implies a want of social recognition and a need for feelings of dependency in the West.
Though the feeling of being emotionally close to another human being is not uniquely Japanese, its expression in terms of amae is.
At the same time, the rich, semantic meaning attached to the term does differentiate Japanese culture, in his view.
There is no doubt that this theory of amae is more developed in Japan and that the feelings it engenders are deep, but that it is unique to Japan is questioned by the fact that the work has been recognized as having a universal application.