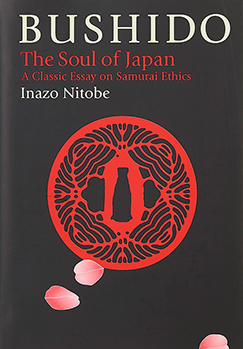 Bushido: The Soul of Japan

This classic, originally published in 1905, remains an important book.
Bushido is characterized as “the way of the warrior,“ “the samurai code of honor.”
During the modernizing Meiji era, Bushido was reinvented and became an important force in the rise of Japanese nationalism.
This “new” Bushido had no written text until Nitobe wrote this book which presents Bushido not just as a martial discipline but as a system of ethics and morals, a whole school of thought that has no set dogma but consists of qualities and practices.
These would include concepts such as courage, veracity, sincerity, honor, and loyalty, all of which he examines.
His learning and the demands of his subject meant that the result would be an eclectic book.
He delved in Buddhism, Shintoism and Confucianism while seeking similarities and contrasts by citing philosophers going back to the Romans, the Greeks, and even various Biblical figures.
Writing in 1905, he could not know to what uses Bushido would be put during the Pacific War, could not see that as a historiographic term “Bushido” would also become a problematic construct.
One which, however, now serves to describe a set of ideals which undoubtedly influenced many from the last days of the samurai until now.