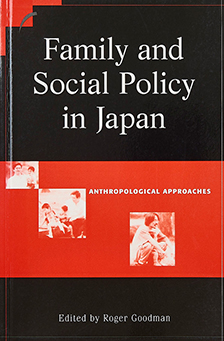 The nine essays here collected and edited by Roger Goodman originated as papers presented at the Japan Anthropological Workshop held in Osaka in 1999.
They deal mainly with fairly recent changes: the aging population, the growing foreign population, education, child abuse, etc.
Goodman states in his introduction that anthropology can bring perceptions that differentiate it from other disciplines.
For example, the anthropologist is in a position to make a distinction “between what people say they do, say they should do, and actually do.”
Further, anthropology has the ability “to unpack the taken-for-granted assumptions that lie behind the production of policy.”
All of this is demonstrated in various degrees in the papers he includes to illustrate his thesis.
At the same time some of these essays are enriched by analyses of legislation or analyses of social issues in the medium, thus straying from a strict definition of the confines of anthropology.
The result is a number of different perspectives on social issues.
Revealed is that the relationship between the state on one hand and the individual on the other is not simply one-way.
Individuals are also molders of policy.