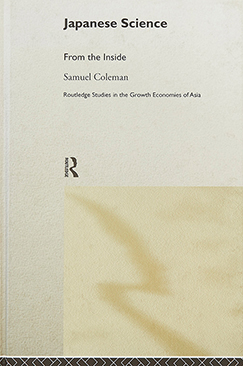 Japanese Science: From the Inside

There is a general impression that Japan has a relatively poor scientific record, that career structure and organization priorities have hampered both scientific research and the advancement of scientists themselves.
A reason for this often advanced is that the poor record is the product of cultural factors—the “Japanese way.”
It is just this concept, however, that Coleman’s book attempts to counter.
In this ethnographic study he demonstrated the importance of moribund policy decision in holding back scientists.
“As long as Japan is unable to translate its wealth and talent into substantial scientific contributions we are all the poorer for it,” writes Coleman.
He then analyzes the problem of career mobility in science in Japan, that the status quo in university and government laboratories, the relations between scientists and lay administrators, and the problems encountered by women scientists.
With the world’s second largest economy, Japan is still faced with excessive governmental control over education and research, with faculties still holding to ideals of age/grade promotion, and a preference for incremental advance over bold experimentation.
As Coleman writes: “Global science needs as many competent players as possible to address the thorny problems of health and environment.”