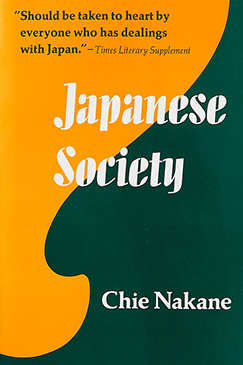 The achievement of this now well-known sociological text is that the author presents not merely a society composed of independent groups and institutions but one that is united by a single overarching structure.
The one basic structure here stressed is verticality (rather than the horizontal structure sometimes found in other cultures), a principle observed in the relations among Japanese, most illustrated in this thesis by those between someone who is senior and someone who is junior, that is someone more powerful and/or richer over someone less.
Though sometimes criticized for its simplicity, Nakane’s principle has made contemporary Japan more understandable for many.
In this book we see the roles of the traditional Japanese family now being reenacted by businesses, the samurai mentality transformed in the salaryman, the lord/peasant, landlord/tenant scenario of traditional Japan is seen as played out in the modern management systems.
Using the structural approaches of (in particular) British anthropology, the author explains her subject through an analysis of the historical social structure of Japanese society.
The different sections of her book indicate both her aims and her means: “Criteria of Group Formation,” “Internal and Overall Structure of Society” and “Characteristics of the Japanese Man.”