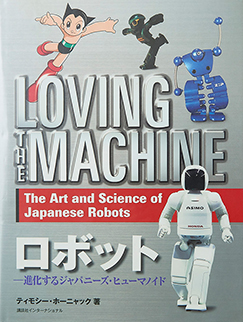 Loving the Machine: The Art and Science of Japanese Robots

Japan has long had an interest in humanoid robots.
Other countries are now equally interested but a difference is that Japanese robots are built and marketed as friends.
They are like pals or pets, they are warm and human-like.
In contradistinction, those of the West seem “all vacuum cleaners or war machines.”
The U.S. has the terrifying Terminator while Japan has the friendly Atom Boy.
Japan sees robots as potential colleagues rather than as potential adversaries.
The reasons behind this attitude make up the thesis of this book.
The author has said that the Japanese “are very successful at combining engineering and design in robotics.
The result is that robots end up seeming a lot more like living beings, instead of just buckets of bolts …
Japanese feel an irresistible urge to treat them as fellow beings rather than lifeless automatons.”
There are numerous reasons for this.
One of them is the demographic problem in Japan.
The population is shrinking - by 2030 some third of all Japanese will be over 60 years old.
The love for robots is based on the coming need of robots.
Not only the elderly but also industry itself will be in need of helping robotic hands.