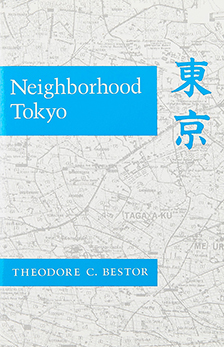 This classic sociological account is an ethnographic analysis of the social fabric and internal dynamics of one small neighborhood—the residential and commercial district in Tokyo where Bestor carried out his fieldwork from 1979 through 1981.
It is a study of the social construct in (and maintenance of ) a neighborhood in a society where such communities are said to be outmoded by the major trends of modernization and social change that have so transformed Japan in the last century.
Bestor’s is a study not of tradition in its aspect as historical continuity, but of traditionalism—the manipulation, and recombination of cultural patterns and symbols so as to legitimate contemporary social realities.
He examines the cliche that Tokyo is just a congerie of villages and then exposes a much more accepted “wisdom.”
Urban neighborhoods, he says, are not rural villages and they do not exist as lingering remnants of moribund social forms.
Rather, they continue as vital social units.
Without the social “glue” that local institutions, shared values of community, and a sense of communal identity impart, neighborhoods could not effectively achieve the political and administrative ends that are so often the sole reasons for their existence.