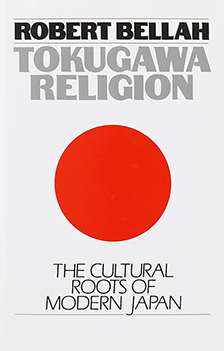 A question sometimes asked is how Japan could transform itself from a quasi-feudal to a modern industrial state in just fifty years.
It shares with the rest of the nearby Asian homeland the same religious influences, the same traditionalism that has, in the opinion of a number of scholars, inhibited modern industrial capitalism in, say, India.
Bellah answers this question by offering a strong argument that the industrialization of Japan came through a special religious configuration.
It affected Japan in the same way that European capitalism was influenced by Protestantism.
Religion during the Tokugawa Period (1600-1868) supported a greatly stabilized society, one now freed of civil wars.
At the same time this led to a concentration of political power in the person of the emperor.
Religion was closely associated both institutionally and ethically with the controls of this central political force.
How this eventually affected the economy of the country is charted by the author.
In short, the religious beliefs of the Japanese created a Protestantlike work ethic in Japan.
It has been said that not since the publication of Ruth Benedict’s view of wartime Japan has the field of Japanese studies been given such a comprehensive and ordered vision of motivations.