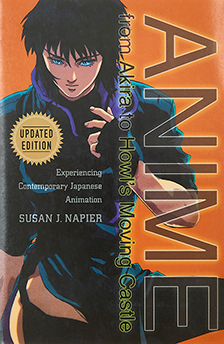 This is an updated edition of a popular book maintaining that Japanese animated film is more than just cartoons for kids, that it can also portray social and cultural themes.
Japanese animation, known as anime to its friends, is now a part of pop culture worldwide.
It is a genre filled with historical epics, science-fiction thrillers, fairy-tales, fantasy—anything the creator and the public wants.
Though sometimes dismissed as simpleminded entertainment, anime can also portray social and cultural issues such as teenage angst, gender inequality, and alienation.
More than half of all movies and television programs produced in Japan are anime, and more and more academics are studying and teaching anime.
Among the many attributes Napier describes in her book is that female characters are given just as many if not more heroic roles in anime, that they are more involved, more motivated, more plausible than male characters, and hence more interesting.
Another discovery is that anime fans find their films feel more real (though animated) than conventionally photographed Hollywood films.
As one of them said: “It is comforting to see, not a Hollywood ending, but one you can identify with.”