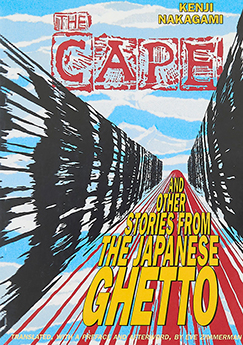 The Cape and Other Stories from the Japanese Ghetto

Kenji Nakagami (1946-1992) won the prestigious Akutagawa Prize in 1975 for his novella, “The Cape.”
In it and the two shorter stories which make up this volume, Nakagami draws on his background as a member of the outcast class of Japan, the burakumin.
Though Japan is often assumed to be one homogeneous culture, this is by no means true.
The burakumin are but one of the several socially disadvantaged groups within this society.
Numerous attempts have been made to abolish this discrimination but, as yet, nothing has completely eradicated the centuries-old discrimination displayed against these people.
Nakagami dramatizes their plight in the title story which is about an illegitimate son, member of a discordant family, whose conflicted feelings about his father merge with a desire for self- obliteration, leading inevitably toward tragedy.
The two stories “House on Fire,” and “Red Hair,” continue this narrative with their insistence upon the discrimination undergone, the despairing emotions experienced, and the desperate passions unleashed.
Often compared to Zola, Gorky, and Faulkner, Nakagami speaks for the downtrodden—those imprisoned by the very society in which they live.
His voice is, as this collection suggests, a true call from Japan’s ghetto.