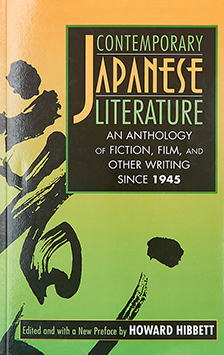 Contemporary Japanese Literature: An Anthology of Fiction, Film, and Other Writing Since 1945

This “Anthology of Fiction, Film, and Other Writing Since 1945,” originally published in 1977, contains translations from nearly two dozen authors, many of them unknown abroad until this time—most of the translations being done expressly for this collection.
Not only are such authors as Jun’ichiro Tanizaki, Yasunari Kawabata, Yukio Mishima and Kobo Abe included, but also such important writers as Junnosuke Yoshiyuki, Kenzaburo Oe, and Akiyuki Nosaka.
Many of the authors now acclaimed in Japan will be new to overseas readers, such writers as Taeko Kono, Shotaro Yasuoka, and Tatsuo Nagai.
In addition, this anthology is among the first to include film scripts as in their own right literature.
Here we are given the scenarios for both Akira Kurosawa’s Ikiru and Yasujiro Ozu’s Tokyo Story.
The editor, Howard Hibbett, himself a distinguished translator, contributes a general introduction and biographical studies of each author, making this one of the most authoritative of anthologies.
As he has written in his introduction to this work: “Japanese literature flourishes today in many forms.
Far from withering in the electronic glare of a post-literate society, it has grown vigorously both as part of a luxuriant popular culture and as a protean art …”