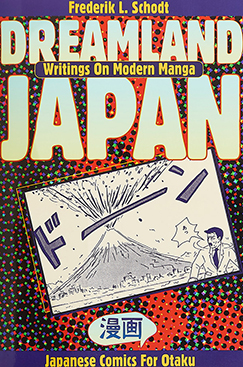 Manga (Japanese cartoons, comic books) are so ubiquitous that many feel an understanding of the phenomenon is necessary for a comprehension of contemporary Japan.
One who might well think so is Frederik Schodt, the scholar who first devoted himself to the study of manga.
Now, a decade or so after his first book, he offers this informally encyclopedic study which becomes the authoritative reference to different categories, popular titles, and publishers.
In it he includes interviews with more than twenty-two contemporary manga artists, and devotes a full chapter to the work of the famous pioneer cartoonist Osamu Tezuka.
In this book Schodt also explains how manga differ from comics in the West.
They have a wider range of subject matter, they stress plot and character over illustration, they often consist of serialized stories that may cover whole volumes.
Of this “dreamland Japan,” the author has said: “the manga industry is sort of a meta industry and it is increasingly the place where new ideas are first presented.
If a story has been enormously popular as a manga, producers know that it will have a strong chance of success in other media.”