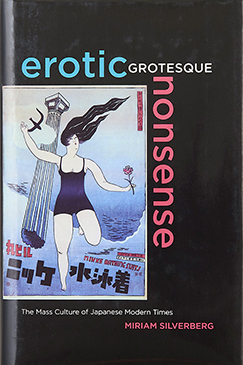 From the late 1920s on, the impact of the modern on traditional Japan had become so apparent that some new terminology was required.
It took the form of a slogan: eroguro nansensu.
Descriptive, it was also ambivalent.
While seemingly critical it could denote admiration and while ostensibly anti-modern (and hence anti-Western) it was to be described through imported terminology—all three words in the slogan are English.
In her richly detailed account of this slogan as descriptive of mass culture of the time, Silverberg defines its parts.
Erotic, meaning pornographic, also connoted an energized, colorful vitality.
Grotesque may designate malformed but it is also descriptive of the culture of the jobless, the homeless, which underlined these periods.
Nonsense can mean silly but it also makes an amount of sense if seen as criticism.
In all, the tripartite phrase, in Silverberg’s reading, indicates the vitality of the time, it is “expressive of a politics that was quite cognizant of the power play involved in the attempts of culture to colonize” and the attempts of the Japanese government to paternalize and to control.
Within this framework Silverberg is able to draw together an enormous number of references and representations.