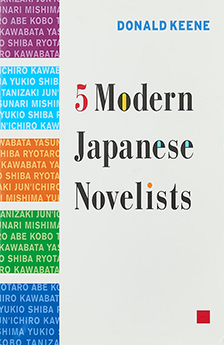 The five novelists are Jun’ichiro Tanizaki, Yasunari Kawabata, Yukio Mishima, Kobo Abe and Ryotaro Shiba.
Each has a chapter devoted to him and his work.
Since Keene had met all of these writers, and was a friend to some of them, he is able to speak not only of the writing but of the men themselves.
As is indicated in the preface to this work, discussions of the first three novelists derive from those in Dawn to the West: Japanese Literature of the Modern Era, part of Keene’s monumental history of Japanese literature first published in 1984.
Though many details found in the larger history are here missing, Keene is able to present a more concise account of each of his authors and, in addition, to share material not available when the earlier volume was published.
An example would be Ryotaro Shiba and his work.
This writer, though extremely popular in Japan, is almost unknown abroad.
“His writing,” says Keene, “inspired a whole country, not with patriotic zeal, but with a quiet awareness of what being Japanese has meant through history.”
Keene’s chapters, part literary evaluation, part memoir, serve as introductions to his subjects.
At the same time the major direction of Japanese literature is indicated as it evolved.