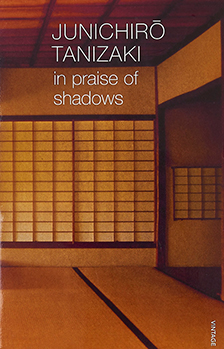 In Praise of Shadows

Here is the 1977 translation (by Edward G. Seidensticker and Thomas J. Harper) of the essay In’ei Raisan, first published by Tanizaki in 1933.
It is a series of thoughts on aesthetics and suggests that though the West has made much of the virtues of light, for the Japanese—much of whose traditional life was spent among shadows—beauty of the highest order was to be found in relative darkness.
He writes of the beauties of architecture, food, lacquer, the complexion of Japanese women, all revealed by the partial illumination of traditional Japan.
He visits the various rooms of old-fashioned homes and writes that “the parlor may have its charms, but the Japanese toilet truly is a place of spiritual repose.”
Comparisons of darkness to light are used to contrast Asian and Western cultures.
While the West in its striving for progress is searching for light, Asia—Japan in particular—is looking for the inner light that only darkness and shadows make visible.
The Asian, says Tanizaki, prefers “a pensive luster to a shallow brilliance, a murky light that bespeaks a sheen of antiquity.
Of course this sheen of antiquity of which we hear so much is in fact the glow of grime.”