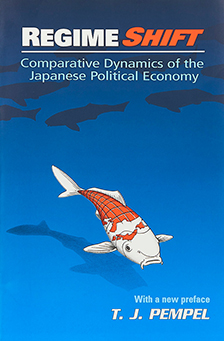 Following the end of World War II both the United Kingdom and the United States fell into a steady economic decline.
At the same time, in contradistinction, Japan was manufacturing its “economic miracle,” building upon the ashes of its former ambitions. The miracle, however, did not long continue.
At the end of the 1990s Japan was stopped in its tracks by a real recession while both Britain and the United States were experiencing economic booms.
In order to explain these shifts the author introduces the concept of “regimes.”
These he defines as “the middle level of cohesion in the political economy of a national state.”
He finds the regime to be more limited than an economic or a political system, yet lasting longer than the administration of a prime minister or a president.
A regime would be a sustained combination of coalitions and policy, something like the New Deal.
What occurred in the case of Japan was a “regime-shift.”
The party system collapsed and the right-left split was replaced by competing conservative parties.
The ruling bureaucracy was pushed into politics where its incompetence lost all public regard.
Change has now become necessary and inevitable.