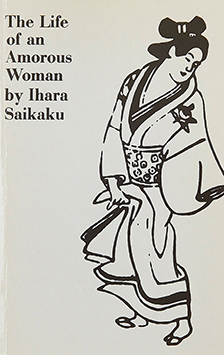 The Life of an Amorous Woman and Other Writings

Saikaku (1642-1693) poet and writer of popular fiction, was one of the best sellers of his day and is now ranked among the classics of Japanese literature.
He wrote his first work of prose fiction when he was 40 years old and its great success ensured that he would write many more.
In 1686 he again won popular acclaim with The Life of an Amorous Woman (Koshoku Ichidai Onna), the picaresque chronicle of a woman who loved love.
She pursues a very active career but along a steeply downhill path.
Still, the work is more comic than tragic and though her predicament is serious enough (from respectability to notoriety) the treatment is anecdotal with many a salubrious detail in her descent from gentility to common streetwalker.
Though the work has been sometimes sentimentalized (as in the famous film version, The Life of Oharu), Ivan Morris’s translation preserves the properly earthy tone.
Sometimes compared to Moll Flanders and Fanny Hill, Saikaku’s nameless heroine ends up a very dubious Buddhist convert.
“I myself embarked on the way of love when I was yet a mere flower bud, and, having first muddied myself, I came to purify myself by dwelling here.”