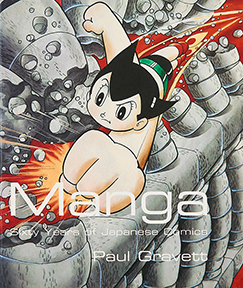 Japan’s output of manga (cartoon) publications is famous.
Nearly forty percent of everything annually published in the country is some form of manga.
Increasingly, too, the West is becoming aware of the phenomenon as it influences their local youth culture through computer games, advertising, film and design.
Paul Gravett’s book presents a popularly written, fully illustrated history of the development of Japanese manga from 1945 to the present.
In it he features extracts from various manga genres, full-page excerpts and gives special attention to such historically important figures as Osamu Tezuka, the creator of Astro Boy.
In the text he pays particularly attention to boys’ comics from the 60s onward, to gender interest in girls’ and women’s comics, to the whole range of dystopic and apocalyptic manga, and to the role that censorship plays, or doesn’t, in manga publication.
Obviously, manga are culturally important. As Gravett says in his introduction: “Manga are getting everywhere.
This is not some passing craze or flavor of the month—manga is the fastest growing category of book sold in America.
So far what we are seeing in English is only the tiniest toenail clipping of the big, scary Godzilla that is manga.”