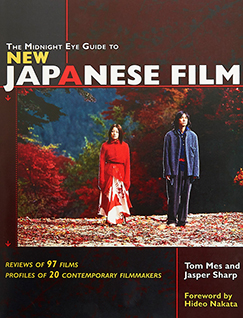 In their introduction the authors say that they intended to write a book that would “focus on who we felt were the leading filmmakers working in Japan today.”
These include a few oldsters (Seijun Suzuki, Shohei Imamura, Kinji Fukasaku) but most of the films here covered are by directors all fairly young.
The authors posit a watershed between past and present Japanese cinema.
The film world of Kenji Mizoguchi, Yasujiro Ozu and, to an extent, Akira Kurosawa, was linked to that of the Japanese studio system.
When this structure collapsed in the 1980s the entire business of making films had to be reinvented.
It is this process which Mes and Sharp chronicle.
They offer profiles of twenty of the most important and influential Japanese directors working today, as well as reviews of more than one hundred “essential films that helped change the face of Japanese cinema.”
These include those of Hirokazu Kore’eda as well as those of Takashi Miike.
They find it “more challenging to venture unto uncharted territory than walk well-trodden paths,” and in their book they attempt to give contemporary Japanese film its due, “carefully avoiding laments about the good old days.”