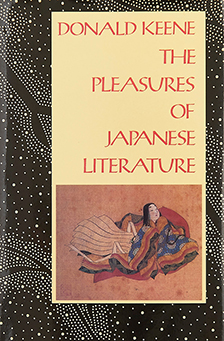 The Pleasures of Japanese Literature

This volume collects a number of public lectures given by Donald Keene in New York and Los Angeles during the late 1980s.
They are devoted to Japanese aesthetics and literature and are less academic than his more scholarly works.
These talks are indeed intended for a general audience.
Here he treats the general topics of Japanese aesthetics, poetry, fiction, and theater, and offers appreciation on these topics.
His insights illuminate many aspects of the traditional Japanese culture that endure until today.
Among these aspects is the appreciation of “perishability,” that quality, so curious to the West, that celebrates the transient, that believes along with the fourteenth-century priest, Yoshida Kenko, that “the most precious thing in life is its uncertainty.”
Keene also takes into account Western inclinations.
Of the Noh he notes that even plays that end happily “are performed today with the deliberation reserved in most part of the world for funeral rites,” and that “many in the audience doze” but are “somehow able to awaken at key moments.”
Yet the past survives in often surprising outlets for expression; a box of sushi, a display of lacquered sandals, even the fake maple leaves on a commercial street.