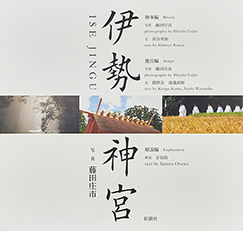 Located in the city of Ise, Mie Prefecture, Ise Jingu is often described as the “spiritual home” of the Japanese people. A massive complex of 125 shrines, it centers around two main sanctuaries: the Naiku or Inner Shrine, dedicated to the sun goddess Amaterasu-Omikami, and the Geku or Outer Shrine, dedicated to Toyouke-Omikami, goddess of food, clothing and shelter. The shrines and their lovely forested precincts attract several million visitors each year. The shrine buildings are rebuilt every 20 years in a process called Shikinen Sengu. From 2009 to 2013, photographer Shoichi Fujita assiduously recorded the events of the 62nd Shikinen Sengu, including 33 rituals and the construction process itself. These images form the “Sengu” section of the book. Another section titled “Rituals” depicts other ceremonies at Ise as well as the natural environment surrounding the shrines, and an “Explanation” section features an essay by Satoru Otowa of the Jingu Public Relations Office. Unlike the piecemeal approach taken by the many other photographers who have produced photo books about Ise Jingu, Fujita’s all-encompassing effort offers a truly comprehensive view of the great shrines.