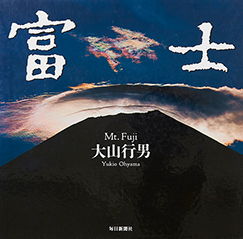 Pursuing his fascination with Japan’s tallest peak (3,776 meters), Yukio Oyama has been photographing Mt. Fuji since the mid-1970s. In 1985 he moved to the village of Oshino at the foot of the mountain in Yamanashi Prefecture, then built a dome house in the Asagiri Highlands on Fuji’s western slope and moved there in 1990. In the course of his quest Oyama came to view the peak, which has been worshipped as a deity since ancient times, as “the ultimate embodiment of Japan’s indigenous spiritual culture.” He has also written that photographing Mt. Fuji is “nothing more than borrowing the figure of Fuji to express one’s own inner life in photographs.” Those spiritual aspirations are reflected in the 132 images making up this photo collection. Beginning with Fujisan (Graphic-sha, 1984), Oyama has published many Fuji-themed photo books, but this work represents a summing-up of his entire oeuvre. Not only does he portray the mountain in all its variegated moods amid changes of the seasons, the weather, and the light, but he also vividly captures the vast pine forests, caverns and other unique natural features of the lava fields created by its eruptions.