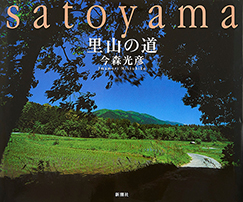 The word satoyama (literally “village and mountain”) refers to areas of farmland and woodland that stretch between villages and mountainous terrain in much of rural Japan. The satoyama are lush ecosystems inhabited by all manner of plants, insects, birds, and small animals. Since the 1980s, Mitsuhiko Imamori has been training his camera on the satoyama around Lake Biwa in Shiga Prefecture, where he was born and raised. Capturing these unique spaces where human activity and nature coexist, his photos first appeared in the collection Satoyama: In Harmony with Neighboring Nature (Shinchosha, 1995), which played a significant role in making satoyama a household word in Japan. Divided into four parts, one for each season, this book gathers Imamori’s most memorable photographs on the theme taken during the intervening years. As one turns the pages of this meticulous documentation of the quiet dramas of the cycle of life, an image emerges of a natural environment and way of life that is on the verge of disappearing in Japan. Since this book was published, Imamori has continued to explore satoyama environments around the world, displaying his work in numerous photo collections and exhibitions.