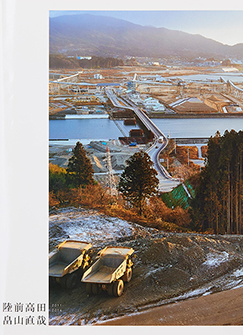 Located on the Pacific coast of Iwate Prefecture, the city of Rikuzentakata sustained some of the worst damage of any community in the magnitude-9 earthquake and tsunami that devastated the Tohoku region on March 3, 2011. Out of a population of 23,000, over 2,700 people died or remain missing. One of the deceased was photographer Naoya Hatakeyama’s mother. Hatakeyama headed for his hometown by motorcycle immediately after the earthquake and was on hand during the searches for the missing. The experience spurred him to begin photographing scenes in the devastated area out of a desire “not so much to show them to someone as to provide a report on the event in its entirety.” This book contains 73 images he shot in Rikuzentakata between March 2011 and December 2014. Together they form a compelling account of the process by which a town ripped asunder and plunged into chaos in the immediate aftermath of the tsunami gradually recovered as residents slowly picked up the pieces of their daily lives. This is a rare chronicle of one community’s destruction and revival.