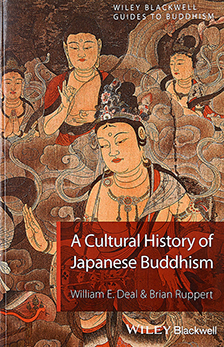 A Cultural History of Japanese Buddhism

Buddhism is one of the great mysteries underpinning Japanese cultural practice and identity. Despite the global interest in the faith following the opening up of Japan in the Meiji period, the complexities of its ritual practice and varied schools of thought have often been neglected. This book explains the various forms of Buddhist faith and how they evolved through different historical contexts and political administrations. This approach provides a compelling religious history that explores not only how people practiced their faith, but how that faith influenced the nation over an extensive period of time.
Beginning with the account in the Nihon Shoki, the authors explore how powerful political families and immigrant groups from the mainland influenced the spread of Buddhism in different ways. The book roots Buddhist influence across more than a thousand years of Japan’s history. While many studies of pre-modern and modern Japan focus on the political influence of military or court factions, this book underscores how deeply intertwined and influential religious practice became in supporting and toppling these power structures. It covers in detail many different schools of Buddhism, including Tendai, Pure Land, and Zen, while also reviewing the things they had in common. The book successfully takes the reader from the ancient to the modern, from temple disputes and political influence, to how modern religious freedom laws in the Post-war period have allowed Buddhism to continue to flourish as a cornerstone of Japanese cultural practice.