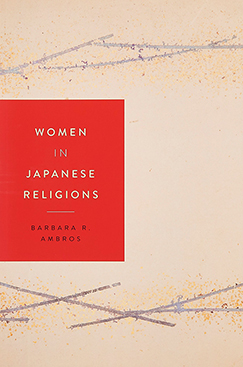 This survey account of Japanese religions rejects the normative framework of religious history narratives, which foregrounds male figures, male-dominated institutions and patriarchal lineage, and instead formulates a long-term gynocentric analysis offering a comprehensive perspective of the role and agency—and the ambiguities therein—of women in Japan’s pluralistic religious culture.
Ambros’ narrative is structured across nine chapters, each of which re-examines the religious activities of historical periods in the context of female figures and practitioners. Doing so reveals a rich line-up of characters: amply-hipped clay goddesses join Himiko, Queen of Wa, in populating Japan’s hazy prehistory as fertile and sacerdotal figures, while the creator goddess Izanami and sun goddess Amaterasu appear in ancient chronologies as powerful yet ambivalent divinities.
Later chapters tackle the institutionalisation of Buddhism in Japan and the roles, initially public, later increasingly less visible, that women have played therein. These are charted alongside wider changes in social practice contributing to female disempowerment, such as virilocal marriage. Notions women as sinful and “pollutants” are also discussed; as is the leverage of this supposed inherent karmic hindrance in women’s subjugation. The final chapter brings us up-to-date with a discussion of post-bubble Japan and how economic and demographic pressures have thrust the relationships between gender and religion into a state of flux.
By contextualising the religious lives and roles of women across political, socioeconomic, and legal history, Ambros demonstrates how, far from being marginal figures, women have made vital and vibrant—albeit it often unsung—contributions to religion in Japan.