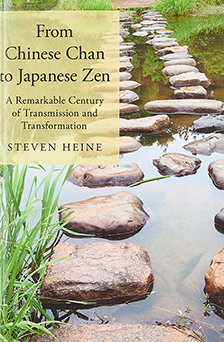 From Chinese Chan to Japanese Zen: A Remarkable Century of Transmission and Transformation

In Japan, the century between 1225 and 1325 saw huge changes in religion and culture. It was during this period that Chinese Chan Buddhism was transformed into Japanese Zen Buddhism. This important book provides a comprehensive survey of the innovations in religion and culture that contributed to this shift and provides an excellent introduction to the origins and spread of Zen Buddhism in Japan. Analyzing the transformation and transplantation of Buddhism from China to Japan from a cultural and sociopolitical perspective, the author argues that the transition happened through a series of initially slow and gradual cultural transmissions, transplantations, and transformations that soon accelerated.

Zen Buddhism began half a millennium earlier as a mystical utopian cult for reclusive monks and the book depicts the growth of Zen through a dynamic crossover between the Chan and Zen sects and this volume shows that, although the development of the Chan school on the continent was coming to an end, the Zen sect in Japan was continuously growing and gradually becoming firmly established. This legacy lasted for several centuries and continues to exert a strong influence in East Asia and throughout the world. The book shows how this successful transplantation from the continent to the Japanese archipelago retains its relevance during the new epoch of global transnationalism that has taken hold since the 20th century. It is an important and informative book for anyone interested in the history, nature and adaptation of Japanese religion and in the social transformations of an important period in Japanese history.