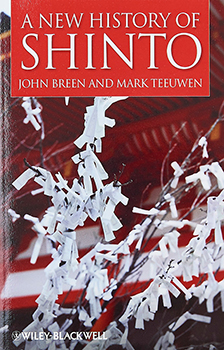 A New History of Shintō

With more than 100,000 shrines across Japan managed by around 20,000 priests, Shinto officially claims about 80 percent of the Japanese population as adherents. In addition to being the country’s largest religion, it is typically considered to be native to Japan. Even so, while few Japanese choose Shinto when asked about their religion, the red torii gates, ancient rites and ceremonies conducted by priests and shrine maidens in their distinctive attire, and scenes of contemplative bamboo gardens offering an antidote to the harried modern world of the Japanese city are nonetheless famous the world over. Jointly authored by two outstanding scholars well versed in the history, philosophy, and beliefs of Shinto, this book shows that the kami, shrines, myths, and rituals have their own, often discreet, histories distinct from the evolution of the concept of Shinto itself.
By focusing on one shrine (Hiyoshi, at the foot of Mount Hie in Kyoto), one myth (that of Amaterasu Omikami, the sun-goddess and mythical ancestor of the imperial line), and one ritual (Daijosai, the first ceremonial offering of rice by a newly enthroned emperor), authors John Breen and Mark Teeuwen explore the processes by which such events entered the collective imagination of Japan’s native religion. By illuminating how our commonly held concept of Shinto is the result of historical processes of continuous construction and reconstruction, they enable us to better understand the religion’s contemporary relevance and to better appreciate its place in Japanese history.