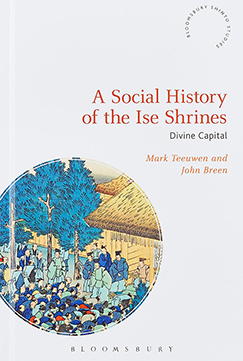 A Social History of the Ise Shrines:Divine Capital.

Every twenty years Ise shrine is rebuilt and re-dedicated. The event entails complex preparations, copious amounts of money and opportunity for politicians and the public to participate in ancient religious rites and rituals. This book is the fourth volume on Shinto edited, translated or written by the authors. It places Ise-assumed to be the historical centre of Shinto-at the heart of their continued attempt to outline the social, political and economic context of the historical forces (Shintoisation) that have created this apparently native Japanese religion.
This excellent volume looks at Ise-assumed to be the central shrine of Shinto and asks what purpose it serves and, if Shinto is the outcome of a modern process of incorporation and adaptation, what was Ise before? Ise under Tenmu in the 7th Century, ambiguous accounts of the shrine in the Kojiki and Nihon Shoki, its importance to Buddhists in the Kamakura period, pilgrimage during Muromachi; economic and administrative frameworks created under Oda Nobunaga and Toyotomi Hideyoshi, as well as the establishment of the shrine as a site of Shinto in the Tokugawa era are covered.
The book concentrates on human agency arguing that the notion of something that could be considered pure Shinto was not applied to Ise until modern or early modern times. The important argument of the book is that a narrative that posits the Ise shrine as the cradle and timeless mainstay of Shinto has no basis in historical fact and human agency is central to any understanding.