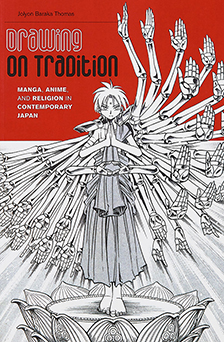 Drawing on Tradition: Manga, Anime and Religion in Contemporary Japan

There is a tacit but palpable assumption that contemporary Japan suffers from a religious deficiency. This author begs to disagree, however, pointing to a wealth of evidence in the highly influential media of manga and anime. Here, he argues, can be found much that is religious – but to do so we must first abandon any reductive preoccupation with formal religious institutions and doctrine or with denominational distinctions, and instead embrace an approach that defines religion as an “imaginative or social endeavor” in which religious activity can be understood as “provisional or playful” and religious content as “malleable”. In particular, Thomas is interested in “vernacular religion”—that is, formal religious ideas exported to quotidian contexts—as both reflective of and formative for Japanese culture.
His core stance, explored through detailed visual and narrative analysis and supported by ethnographic and historical research, is that manga and anime are multi-functional religious spaces, at once vehicles for the dissemination of existing religious vocabulary and images, sources of inspiration for innovative religious creation and new notions of sacredness, and living and changing reflections of religious frames of mind in contemporary Japan.
Of note is the author’s concept of shūkyō asobi (religion play), meaning both religious entertainment and playful religion, which underpins his understanding of the intersection among authors, artists, audiences, and the religious ideas they are (re)creating and consuming. This thought-provoking narrative offers a fascinating perspective on these still understudied popular culture forms, revealing a rich and highly plastic relationship with religion as imaginative process.