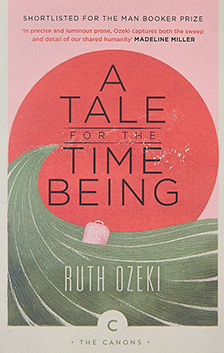 A Tale for the Time Being

A gyre is a string of circulating ocean currents: “Imagine a ring of snakes, each biting the tail of the one ahead of it”. The endlessly orbiting gyre is not just a conduit for assumed flotsam, in the form of a diary-containing Hello Kitty lunchbox ripped from its owner by a tsunami across the globe, but is also a deep thematic structure for a novel that boldly embraces vast, cyclical themes: death, memory, quantum mechanics, time and its transcendence (via the writings of Zen master Dogen), tides and corporeal ties, the intimate and intertwined relationship between reader and story-teller.
Despite these grand themes, the novel’s central hook is quite simple: semi-fictional Japanese-American author Ruth finds said diary on the beach in Canada, written by self-proclaimed “time being” Nao, a Japanese-born American-raised girl displaced and depressed by her relocation to Tokyo. Nao determines to tell the story of her anarchist-feminist Buddhist-nun great-grandmother, Jiko, and it is around these three women that Ozeki constructs a rich picture of sometimes seemingly stereotypical contemporary Japan, referencing salaryman burnout, kamikaze pilots, school bullying, French maid cafes and suicide. It is Nao’s angsty voice, as she attempts to situate herself in a country where she is ethnically at home but culturally at sea, that provides the driving narrative force.
This metafictional, meditative, and multi-layered novel manages to seamlessly navigate through multiple temporal and spatial currents to weave an intricate and invigorating tale of hope, loss and humanity.