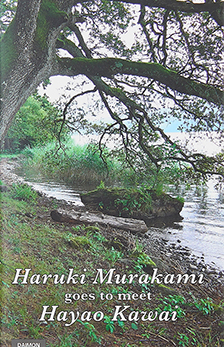 As thought-provoking as it is thoughtfully presented, this is an annotated transcript of a conversation had between two formidable voices in contemporary Japanese culture: novelist Haruki Murakami and the late Hayao Kawai, a psychoanalyst and author. Their unstructured and informal dialogue, recorded over a two-day visit and lubricated with food, beer, and laughter, documents the private thoughts of these renowned public figures.
Both men spent significant time living abroad—Murakami in the United States, Kawai in the United States and Switzerland—and their experiences inform their discussions on such topics as Western and Japanese concepts of the individual, the logical structure and linearity of the English language versus their native Japanese, and approaches to healing through psychotherapy and analysis.
Another theme the two address is relationship: author Kawai addresses that between the body and the novel; the therapist and the patient; husband and wife, each considered in the wider context of Japan’s releation to the West and to itself.
The two met in 1996, not long after a fatal sarin gas attack on the Tokyo Metro. Violence, pain, and recovery are also recurrent themes.
No claims are made and no conclusions presented; what matters here is the dialogue rather than its outcome. In his foreword Murakami describes the almost healing effect of conversing with Kawai—the “marvelous, gentle sensation” of a given day’s mental irritation abating. Something of this sensation comes through to the reader: each man’s skill for succinct self-expression brings an up-close, calming clarity to this short work, even amid the sweeping scale of its topics.