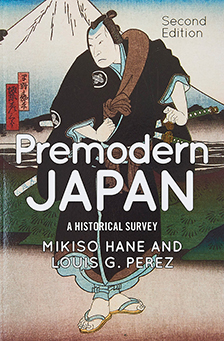 “…Contemporary Japan cannot be adequately understood without an examination of its early history.”
With this statement, Louis G. Perez embarks on an impressive revision of the late Mikiso Hane’s comprehensive guide to more than a thousand years of Japanese history. Beginning with a survey of the mythological tales surrounding Japan’s origins, this volume explores Japan’s extensive history from several different angles in an easy and accessible prose style. Included in the narrative are clear analyses of government structures, from the early period, when women played political roles and power centred on the court, to the increasing dominance of regional military families from the twelfth century through to the Tokugawa period (1600-1868). Perez and Hane’s account frequently references Japan’s relations with its neighbours in East Asia, documenting how ideas from abroad, such as Confucianism and Buddhism, penetrated Japan from China via Korea. These diplomatic relations in earlier centuries helped inform later interactions in both trade and culture. Complicated new relationships with the more distant European powers also emerge in the fifteenth and sixteenth centuries, demonstrating that, whilst an island, pre-modern Japan never completely cut itself off from outside ideas, nor hesitated to assimilate those it valued into its own cultural practices.
This book charts the key events in Japan’s long pre-modern history, offering detailed explanations on their contexts and implications without ever losing focus of the continuous nature of the overall narrative. An important book on an important, but little understood, period of Japanese history.