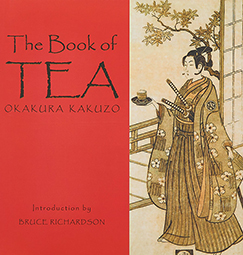 The Book of Tea

This 1906 essay is a wide-ranging yet cohesive exploration of “Teaism” (chado), a philosophy that author Kakuzo Okakura contends has permeated every aspect of Japanese culture across every social class. He traces, almost reverentially, the development of Teaism through major movements of thought and aesthetics in China and Japan, principally Taoism and Zen, while simultaneously introducing Teaism’s architecture and tea-equipage, its ceremony and tea masters. Written originally in English, this is a seamless and self-assured study, intended for educated Western readers, of what Okakura calls Japan’s “religion of the art of life.”

It is a book of its time: the author’s life embodied the juxtaposition of East and West that resulted from the “opening” of Japan to exchange with the West in the latter 19th century. Born in 1862 to a samurai father who relinquished his status to become a merchant, educated in English, and sent abroad to study Western fine arts, Okakura possessed an exhaustive knowledge of ancient Asian art and philosophy—amply demonstrated here—as well as a considerable understanding of European art history.

Despite such close links to the West, he nevertheless rejected the then prevailing notion of the West as inherently superior. He laments the “unfavorable” Western attitude toward any understanding of the East, based as it is on “meager translations” and “unreliable anecdotes.” Indeed, this book is a love song, not just to the “liquid amber” of Teaism, but to the wealth and depth of the Asian thought and art of which it is a distillation.