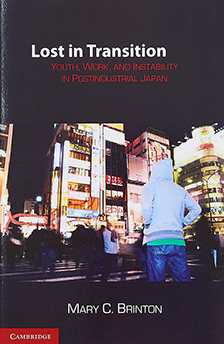 Lost in Transition: Youth, Work, and Instability in Postindustrial Japan

Brinton began her research into the Japanese high school as a social institution tasked with facilitating the transition into stable employment (understood as one of the pillars of fully-fledged membership of society) for lower-educated youth in the period immediately following the opportunity-laden economic boom of the 1980s. Why were they so much better than US high schools at setting non-elite kids on the path to productivity and security?
Then came the crash, and the economic recession and employment restructuring that followed, particularly the dwindling of employment opportunities, have had a profound impact on these transitions, on the institutions involved in them, and in the individual’s relationship with what Brinton calls “social locations” (ba), frameworks that provide individuals with both a foundation for material success and contribute to their sense of identity and well-being. Adrift from these ba, young people in postindustrial Japan have experienced new lifestyle patterns, described in neologisms and often poorly perceived by preceding generations: as freeters, parasite singles, working poor, net-café refugees, NEETs.
Brinton’s interests lie in how institutions can shape the opportunities afforded to individuals. She argues that the unraveling of the high school’s role in structuring the school-to-work transition is indicative of a deeper transformation and presents a structural interpretation of the socio-economic disparity that is increasingly presenting itself in Japan, beginning with the so-called “lost generation” and continuing unabated today. She draws upon a range of sources to present a sensitive picture of the plight of non-elite, particularly male, youth in a changing Japan.