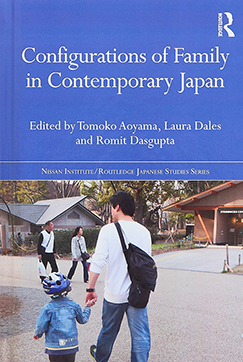 Configurations of Family in Contemporary Japan

Just as there has been a tendency to view Japanese society as homogenous, so too has there been a dominant focus on the urban, middle-class, nuclear – and purported ideal – family in discussion of contemporary Japan. But just as Japan’s society is (and always has been) heterogenous, so too is there rich diversity and complexity among its families. Some of this comes from recent demographic shifts: being a super-aging society with a rapidly declining birth rate, there are pressures changing how families form and function. Postindustrial socioeconomic and structural shifts have impacted employment opportunities, in turn affecting financial stability and choices affected by prosperity, notably marriage and having children.
Such is the context for this multi- and interdisciplinary collection of essays on aspects of the meaning and practice of family in today’s Japan, which is divided into four thematic sections. The first examines non-typical Japanese families falling outside of conventions: singlehood, the LGBTI “family of friends”, and post-bubble changes to family norms. The second looks at aspects of aging and intergenerationality in women’s familial roles in the contexts of folk and children’s literature, manga and anime.
The third section focuses on perceptions of how parents (should) approach children’s education by looking at generational changes among Japanese migrant families in Brazil and discussing the so-called “monster parent” as evolved from the more positive “education mom” stereotype. The families built by transnational Japanese women in Bali and Australia are discussed in the final section, particularly in relation to aging care, community engagement, and intrafamily roles.