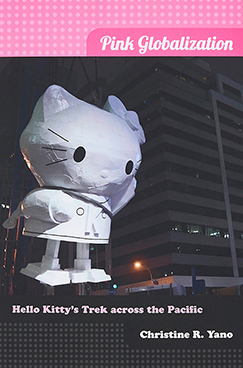 Christine R. Yano’s absorbing anthropological study positions this iconic feline at the vanguard of “pink globalization”—the transnational flow of goods and images associated with “kawaii” and contextualized by Japan’s cute-cool culture. Yano unpacks the nuance of kawaii—embodied by Kitty-chan and often glossed as “cute”—from its multiple and sometimes contradictory elements: fantasy, femininity, sexuality, complaisance.
Sanrio, the company behind Hello Kitty, claims a quasi-religious stance in the making and marketing of their mega brand. Supposedly this “Way of Kitty” transcends capitalism to focus instead on the promotion of friendship and happiness. Yet Kitty is “pure license”—an ultra-consumerist presence that extends across endless swaths of merchandise. Yano provides an in-depth analysis of Sanrio’s marketing strategies and their significance in the context of related macroprocesses such as government-led soft power policies.
The book is also an absorbing journey through the micropractices of fandom. Interviews give insight into a myriad of consumer meanings navigating gender, national identity, and class that are projected onto Kitty-chan, a phenomenon made possible by the character’s intentional blankness. These include acts of subversion and appropriation: Kitty as punk, as lesbian, as soft-porn signifier. Yano points to Sanrio’s decision to embrace such apparent transgressions as the commodification of subversion. This strategy of reimagining extends also into the art world, where she has been reframed across multiple genres.
Hello Kitty has endless semantic flexibility, representing both the perceived powerlessness of kawaii and the cultural and economic power of pink globalization. Yano offers an engaging and eye-opening discussion of the interplay of power with the dynamics of cute-cool, culture, and commodity.