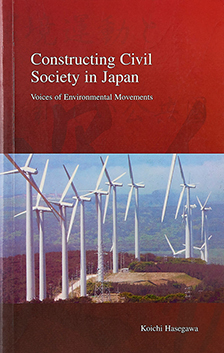 The author here traces the growth of environmental politics in Japan.
He argues that recent environmental concerns have created a more active public sphere, one that can provide a guideline for a sustainable society.
The typical image of the obedient Japanese following a typical traditional order is still internationally strong.
Actually, however, the protests of those wanting reform are loud and diverse.
Consequently, this book also aims toward being a picture of modern Japanese society, focusing as it does on the dynamics of the environmental movement and the public space.
This vigor of Japan’s independent environmental research reflects the severity of the pollution and the social and political pressures exerted by largescale industrial development, supported both by industry and government.
As the author states, the environmental movement has shone new light on the needs of the citizens and through collaboration with both industry and government, has offered many pioneering efforts.
Indeed, the environmental movement may well become a compass for modern society.
Earlier efforts to support environmental consciousness were too often limited to a single example.
This book, though emphasizing both fieldwork and case studies, focuses on the many new social movements in Japan since the 1980s.