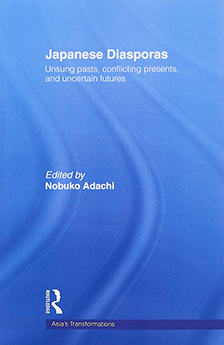 In this collection of 14 essays by scholars based in North America and Asia, the authors argue that compared to studies of other diasporas, the Japanese diaspora has been under-researched. Edited by Nobuko Adachi, the book is divided into three thematic sections. The first three essays deal with the history of Japanese immigration and emigration policy since the Meiji era (1868–1912). The next six chapters focus on the creation of diasporic cultural identities through the specific histories of overseas Japanese in Manchuria, the Philippines, Brazil, Canada, Peru, and Latin America. The third section of five essays questions notions of a unified diasporic cultural identity by examining the construction of ethnically-based identities among various groups of Nikkei (people of Japanese descent), overseas Okinawans, and Japanese working abroad.

The book argues that the term “diaspora” implies some kind of uniform cultural identification with an original source identity, and the essays in the second part demonstrate how a classic form of diaspora is indeed emerging among overseas Japanese communities. However, Okihiro and Tsuda, in their essays in the third section, question this by claiming that the dominant discourse of Japanese national-cultural-ethnic identity current in Japan undermines the “Japaneseness” of the diaspora, especially when it comes into close contact with Japan, as the national, cultural and ethnic elements of Japanese identity are conceived as being indivisible. The book shows that from the Japanese perspective, it is not necessarily sufficient to have Japanese heritage to lay claim to a Japanese identity: one needs to also act culturally Japanese.