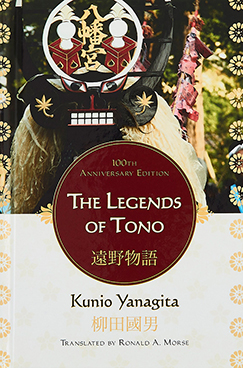 The Legends of Tono

This seminal collection of folk legends from the mountainous northern town of Tono was instrumental in establishing folklore studies in Japan; the author, Kunio Yanagida, is now renowned as the founding father of the discipline. Yanagida’s motivation for the work was, as translator Ronald Morse suggests, rooted in a desire to explore the essence of the Japanese psyche and to preserve rural culture and community.
The Legends of Tono brings together 119 legends, each relayed to Yanagida by an oral storyteller native to the remote Tono. The collection was published in 1910, and soon succeeded in capturing the popular imagination with the “living abundance of the Japanese oral tradition” it had captured. Yanagida’s rendering of these local legends—the distinction with fictional tales is important— is rooted in careful observation and presented with what Moore describes as a “crisp classical Japanese literary style of expression”.
The tales explore the interplay between the two worlds straddled by the mostly peasant protagonists: the observed, physical world, of mountains, rivers, and houses, and the concealed, animistic world, populated by spirits and gods. They capture the fantastic, the grotesque, and, sometimes, the joyful in an agricultural community that is also home to flat-headed water sprites, shape-shifting foxes, and long-nosed goblins. In doing so, they weave a rich landscape for the examination of the feelings, psychology, and beliefs of Tono peasants and, by extension, rural Japan as a whole. This powerful and influential collection continues to inform understandings of Japanese history, anthropology, and literature.