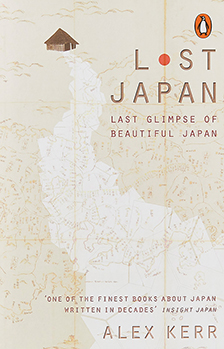 Part memoir, part lament, this book by Alex Kerr was first published as a series of articles in Japanese in 1993. It traces the author’s introduction to Japan and his deep engagement with the study of both Japanese and Chinese cultural traditions.
The son of an American naval officer stationed in Yokohama, Kerr buys an abandoned farmhouse in the remote countryside of Shikoku. As he learns about the architectural principles and crafts involved in traditional house construction, he gradually becomes aware of the highly sophisticated culture of pre-modern Japan, and the danger of its being lost forever amid the ongoing rush to modernize.
Each chapter addresses a different stage of Kerr’s career as he becomes an ardent student of Kabuki, calligraphy, and Asian art. Through the help of well-placed friends, he eventually sets up in Kyoto as a dealer of traditional art. During the heady days of Japan’s bubble economy he becomes involved in the business of property development. The book is important for its outline of the distinction between the freedom found in the sensuous cultural traditions rooted in the Heian period, and the rule-obsessed, regimented, and homogenized mainstream culture of the modern day. What does the rebellious playfulness of Osaka culture, dominated by merchants rather than samurai, offer to withstand the stultifying cultural homogeneity imposed by an over-powerful Tokyo? Kerr offers an important and entertaining look from the viewpoint of one man’s lifelong dedication to Japan and its traditions.