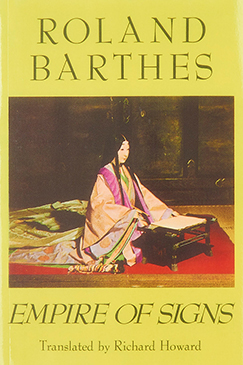 Empire of the Signs

Published in French in 1970, this anthology by Roland Barthes is a reflection on his travels to Japan in the 1960s. In twenty-six short chapters he writes about his encounters with symbols of Japanese culture as diverse as pachinko, train stations, chopsticks, food, physiognomy, poetry, and gift-wrapping. He muses elegantly on, and with affection for, a system “altogether detached from our own.”
For Barthes the sign here does not signify, and so offers liberation from the West’s endless creation of meaning. Tokyo, like all major cities, has a center—the Imperial Palace—but in this case it is empty, “both forbidden and indifferent … inhabited by an emperor whom no one ever sees.” This emptiness of the sign is pursued throughout the book, and offers a stimulating alternative line of thought about the ways in which cultures are structured.
And this, rather than Japan itself, is ultimately what the semiologist-turned-poststructuralist seems to be interested in. Indeed, on the first page Barthes explains that the book is about a “fictive nation” he labels Japan. Yet, this premise gets lost in the following pages as the images and illustrations, while forming part of the message, make the object of his interest less fictive. Despite Barthes’s self-awareness, the book carries the unintended risk of essentializing its subject. Still, conceived as it was in 1966, just two years after the Tokyo Olympics had signaled Japan’s successful re-construction, it is a fascinating account to take up now as Tokyo prepares to host the 2020 Summer Games.