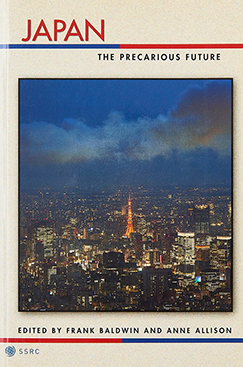 This book is a collection of thirteen essays by Western and Japanese academics based in Japan, the United States and France. The book is the Japan edition of a series of academic volumes called Possible Futures, which attempt to analyse the near future of various societies. The thirteen chapters are divided into four thematic sections united by the concept of ‘precarity’-the belief that from many different perspectives the near future is precarious for Japan. The first four chapters focus on the shrinking and rapid aging of Japanese society and the future of economic inequality and employment practices. The next two chapters focus on disaster management and recovery, of particular relevance following the ‘triple disaster’ of 2011. The next three chapters all address aspects of Japan’s financial, industrial and technological future. In the final four chapters, the authors consider political issues concerning Japan’s security and regional rivalry with China, the prospects for future political leadership in Japan and constitutional change in domestic politics.

Whilst the first section is pessimistic about Japan’s ability to deal with issues concerning population, employment practices and economic inequality, the second and third sections are guardedly optimistic, seeing positive improvement in disaster management and inherent strengths in Japan’s financial and industrial positions. Although the future for international and domestic politics remains ambivalent, positive outcomes in diplomacy and a transformative politics at home are certainly possible. The book offers an interesting, speculative take on contemporary issues facing Japan.